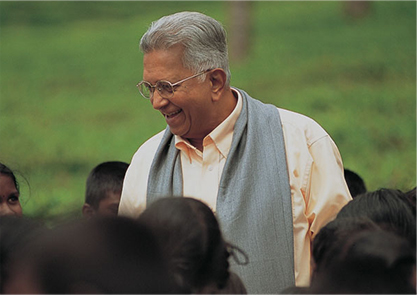 In the 1950s Settlor of the MJF Charitable Foundation, Merrill J. Fernando conceived, the idea of a business that would help restore the fortunes of his country’s ailing tea industry, , whilst sharing the benefits of that business with the community. Merrill believed that no business was possible without the combined efforts, involvement and commitment of workers, staff, clients, consumers and in the case of tea - the environment. He was determined that his business should be a matter of human service.

It took Merrill just under 40 years to bring his family tea, Dilmah, to consumers and his idea to fruition. The concept of a young, middle class Sri Lankan seeking to establish an ethical, producer owned tea business was at the time both controversial and fiercely opposed. Then as now, big transnational businesses controlled the tea industry. Throughout that time he fought to achieve his dream, he continued to fulfil the commitment of caring for his staff and workers as comes naturally to any family business.

As Merrill’s Dilmah Tea became a relatively small but internationally available brand, the scale of the much larger social obligation required the establishment of the MJF Charitable Foundation. This marked the evolution of Merrill’s philosophy, from caring and sharing with his initially tiny staff, to a wider group of tea estate workers, and finally to the nation. More than half a century after he dreamed an impossible dream, it became a reality.

The MJF Charitable Foundation represents an alternative economic model, it transcends charity and corporate social responsibility one that is a genuinely sustainable and fair way of doing business. This ‘way’ acknowledges that social justice, community and the environment are integral elements in any business process not as options or part of a marketing led Corporate Social Responsibility (CSR) strategy but as a core feature of the business objectives.

Dilmah tea companies maintain a clear understanding of the role of the wider community, the environment, workers and staff in making its business possible. Acknowledging this reality, the personal funds and assets of Founder, Merrill J Fernando and his family as well as a significant share of the revenue of the MJF group of companies fund the work of the MJF Charitable Foundation. As the companies develop, so does the work of the Foundation.