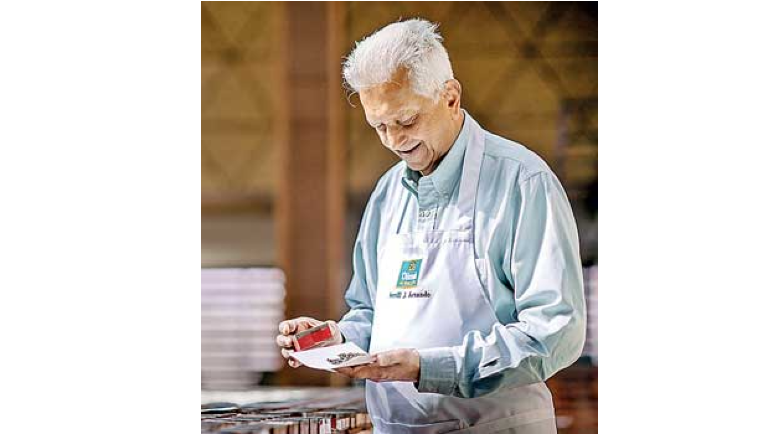 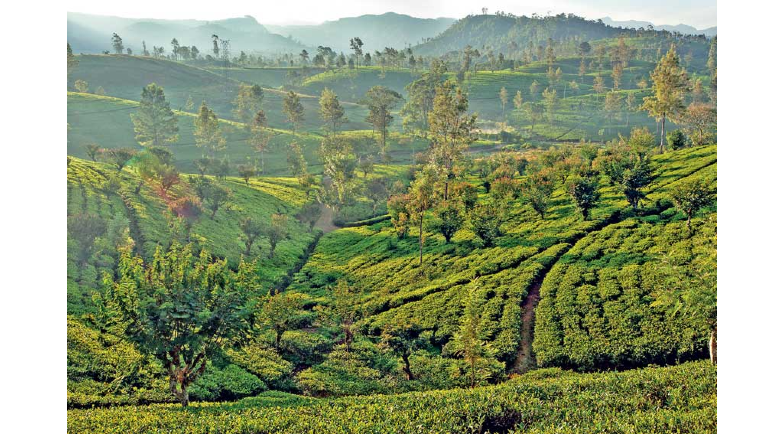 Seven large tea plantations of Kahawatte Plantations Plc, a Regional Plantation Company owned and managed by the MJF Group of Companies, are located in the Nawalapitiya region. The enhancement of the medical facilities of the hospital will be of direct benefit to around 500,000 people, the majority of them part of the plantation community.

The Nawalapitiya initiative is one of many humanitarian projects – launched and funded by MJFCF – which, together with Dilmah Conservation, annually receives 15% of the pre-tax profits of Dilmah Tea, benefiting and empowering marginalised and underprivileged individuals and communities. It is unlikely that any other organisation in this country makes an equivalent contribution with such wide-ranging impact, for the betterment of the social condition of the environment it operates in.


In the context of the unresolved debate around escalating production costs, declining business revenues and the entrepreneur’s broader responsibility to society, the Dilmah business model offers a rare case study, unique as well as exemplary.

Social justice is generally defined as the restoration of equitability in terms of the distribution of wealth, opportunities and privileges in a society. Nelson Mandela once said that “overcoming poverty is not a gesture of charity but an act of justice. It is the protection of a fundamental human right…”

Some governments do much but there is still a gulf between what is delivered and what is actually needed. That is the gap private enterprise must seek to bridge. The unpalatable reality is that neither governments, nor international aid agencies, whose contributions to the cause are outweighed by their massive administrative costs, have had a measurable, long-term impact on the human condition in areas which matter most.

That is the significance of Merrill J. Fernando’s mission – addressing inequality, conserving and restoring the environment, caring for the disabled as a natural extension of doing business, and doing so with a business-like emphasis on impact, rather than appearance.

Dilmah Tea and its associated MJF Group and its fortunes, linked primarily to the production and export of tea, is probably the only company in Sri Lanka which is driven by a corporate mandate for the alleviation of poverty through the profits it generates. Clearly, its operational model embodies both business ethics and human service.

The MJFCF and Dilmah Conservation have been delivering transformational social and environmental change amongst plantation and other communities and ecosystems for the last two decades. Environmental preservation and restoration are integral aspects of poverty alleviation with, livelihood stability directly linked to the health of the environment in marginalised and low-income communities, especially in rural areas. Merrill J. Fernando embedded ‘Purpose’ into the core of his business, long before doing so was considered a responsibility of business.

This brings into sharp focus the economic sustainability of the exceptional enterprise with a sincere and continuing commitment to social development. If, as an example, one were to use “Dilmah,” the brand which powers the MJF Group, the latter’s ability to sustain its delivery of social justice is subject to brand profitability. A fair price for tea, wherever in the world it is consumed, will ensure the long-term nourishment of a higher purpose which transcends the simple profit motive.

The significance of Dilmah is that wherever in the world it is consumed, each cup of tea helps to make life a little better for the disadvantaged. What makes the brand truly exceptional is that though developed in a less developed country, it also supports palliative care, mental health, childhood cancer and other deserving causes, in other countries.

The tea industry in Sri Lanka, as in any country in South East Asia, is a colonial heritage. As in every colonial relic, it has its undesirable features.

The industry, from production on the estate to the sale and distribution of the product in supermarkets the world over, represented one value chain, in which every link was controlled by the original colonial interests. A finished product was, in actual fact, purchased as a raw material, with value added outside the country of origin, enriching the buyer, the exporter, retailer and distributor. Any benefit to the farmer and producer was purely incidental.

It was a system of value extraction which denied the grower/farmer and the plantation worker, a rightful share of the wealth the industry generated outside the country of origin. The distressing reality is that despite the exit of the colonial power over seven decades ago, the situation vis-à-vis the tea farmer remains much the same.

The local successors to the colonial interests, with very few exceptions, have continued to feed the same exploitative chain. One of the few entrepreneurs who broke the fetters has been Merrill J. Fernando, founder of the “Dilmah” brand and today the Chairman of the MJF Group of Companies.

As a young, disempowered component of that manipulative colonial model, he would have seen the inequity of the system. His disenchantment with the visible inequities and unsustainability of that model, eventually led to the establishment of the Dilmah brand. Finally, the country of production had a brand which purchased its product at origin, and that which was owned, packed and marketed by the same country. The profit made by that model came back to the country of origin.

The social justice that “Dilmah” delivers has been made possible because one man dared to challenge a seemingly invulnerable citadel. The many action-oriented and target driven initiatives delivered by MJFCF, which focus on dignified empowerment, changing the lives of people and simultaneously stabilising the environment, are not consistent with the notion of conventional Corporate Social Responsibility, which is based on the simplistic donation concept. The conferring of empowerment and dignity, though more challenging to the giver, is of lasting value to the recipient, as against simple acts of charity.

The ability of Dilmah to deliver on its self-imposed social justice mandate, however, hinges on its ability to continue to sell its product at a reasonable price. Distribution of wealth in the pursuit of social equity or the correction of imbalances is possible, only as long as there is a reasonable surplus.

In a challenging economic environment, in which most International rival brands respond to competition by aggressive price discounting accompanied by lowering of product quality, thus retaining the same profit margins, brands such as Dilmah which insist on staying true to founding values of product quality and authenticity of origin, are placed at a tremendous disadvantage.

The consumer who patronises a devalued product is unwittingly contributing to the diminution of the people and the environment which produced the tea in their cup.

In a global discourse currently dominated by the wide-ranging and inimical impact of a pandemic, with no permanent remedy in sight, the role of the plantation worker in Sri Lanka, in producing the world’s most widely consumed and healthiest beverage, takes on a special meaning.

The tea industry in Sri Lanka, directly and indirectly, feeds over two million people, equivalent to around 10% of the population. Around 90% of this group live and work, in or close to the plantations, most of them earning a daily wage. The latter has been a contentious issue for decades, dependent as it is on the employers’ ability to pay, which, in turn, is directly connected to the ungovernable and unregulated auction price of the black tea.

The consumer purchasing an elegantly configured tea pack from the supermarket, pays a price which is greater than the auction price by an order of magnitude. However, the surplus created by that price differential does not benefit, even marginally, the grower and the plantation worker in the country of origin. Instead, it enriches successive links in the exploitative chain which is draped across other continents, largely in the affluent West.

The following quotes encapsulate this inequitable feature, common to all Third World plantation economies, fashioned by exploitative colonial interests for their personal benefit.

“Everyday low prices are built on crumby lifestyles, not only for Mexican cloth cutters, and Thai shrimp farmers and Chinese toy makers but for all of us. There is nothing innovative about business plans built on the back of insecure, low wage workforce, about depleting resources and polluting environment to cut costs, about squeezing producers until they fail, quit or cheat” (Ellen Shell, journalist writing in ‘Cheap: The High Cost of Discount Culture,’ Penguin, 2010);

The two final sentences above explain our argument. One man dared to disrupt that exploitative chain by marketing a personal brand, built on creating value for his customers, tea workers, the environment, the national economy of Sri Lanka. He acknowledged that his success is owed to people and planet, and he channelled part of the economic surplus for the greater good of his community. But a lone crusader can only do so much.

To make a meaningful difference, all links in that chain, including the affluent consumer, must believe that there is a higher purpose to enterprise than mere profit and pay a price commensurate with the authenticity and quality of the final product. Unless there is willing participation and active subscription to that concept, a rare brand such as Dilmah, which has made a measurable contribution both within and outside plantations, will be waging a lone battle, despite its already significant impact on medical, nutritional, educational and ecological platforms as well as on gender based issues.

Dilmah, despite obvious constraints, continues to straddle the uneasy divide between private enterprise and social responsibility. For it to continue to do so, and for any other like-minded conglomerate which may choose to emulate the Dilmah model, the ability to sustain the spirit of giving is dependent on every stakeholder accepting the responsibility and ensuring a price that is fair to both the grower and the consumer. “Fair Trade” needs to be a double-edged sword.

The equity that the industry desperately needs, however, will continue to be an illusion as long as multinational corporates, in faithful emulation of the exploitative colonial model, continue to pursue market dominance and profit through cutthroat competition, consciously denying the preference of the responsible consumer who is prepared to pay an equitable price for an ethically delivered product.

This article was take from the Daily FT