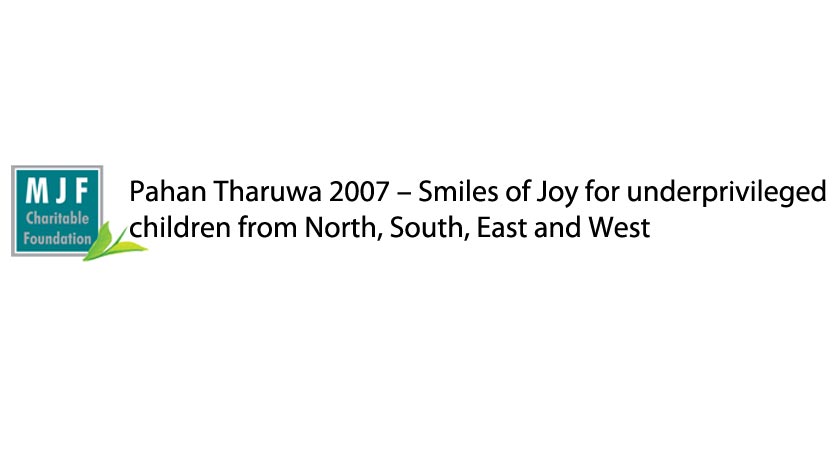 Pahan Tharuwa, meaning Ray of Hope in Sinhala is the annual Day of Joy that the MJF Foundation has offered underprivileged children since 2001. The event brings together children from the most remote and marginalised parts of Sri Lanka, for a day of fun. The concept of Pahan Tharuwa evolved from the philosophy that children need to play, and that for their normal mental development children need to interact with their peers, experiencing care, fun and exhilaration. Sadly, many children in Sri Lanka are deprived of these aspects of a normal childhood due to circumstances of extreme poverty, physical & mental abuse or the conflict in the north and east of Sri Lanka.

On 10th December 2007 the MJF Charitable Foundation hosted 1,200 children at Leisure World – a theme park approximately 40km from Colombo. This year the emphasis was on offering joy to children from recently cleared areas of the East. More than 400 were therefore children from schools in the recently conflict affected areas of Vakarai and Eravur.

These children were brought to Colombo with the support and involvement of Major General Parakrama Pannipitiya, Security Forces Commander (East) and his staff. They joined others from tea growing areas – Talawakelle & Elpitiya – and children from the MJF Kids programme for deprived children from urban communities (from slums in Peliyagoda & Maligawatte). Also present for the Day of Joy were children from the MJF Foundation sponsored P.E.A.C.E. programme in Bleomendhal Road, Colombo. Together the children formed a truly national representation of children from North, South, East, West and Central parts of Sri Lanka.

The children were entertained with fun rides, exotic entertainment and a live band – The Wildflowers – that provided music to their energetic dance routines. Singer Ronnie Leitch delighted the children with an exuberant and entertaining performance whilst talented soundman Mangala Premadasa enthralled them with his vocal skills.

A highlight of the day was the MJF Kids song which was sung with gusto by the 120 MJF Kids in an inspiring demonstration of talent. Each child was provided breakfast, lunch and afternoon tea as well as a gift of a school bag which was presented by MJF Foundation Settlor, Merrill J. Fernando. In a bid to encourage the practice of saving they also each received a till crafted by the Koulara community. This was the product of an MJF Foundation Local Heroes project and carried a special message by the Settlor to the children about the importance of saving for the future.

The event brought together children from North, South, East and West, and differences were nonexistent and even the language barrier was trivial when the children united in song, dance or play. Being able to interact with children from different parts of the country not only gave these children the opportunity to forget their troubles and build pleasant memories, but also helped shape their outlook on people from different ethnic groups.

Through the years Pahan Tharuwa has brought together children from different backgrounds such as from the conflict affected North and East of the country, urban slums, tsunami affected children from refugee camps and children of the workforce on tea estates. Each year the children go away with unforgettable memories of a special day devoted to celebrating the most fundamental right of a child – the right to play.

The MJF Charitable Foundation is committed to nurturing the talent of underprivileged children and providing them with the tools to build their dreams upon. The 120 MJF Kids living in underprivileged areas in the vicinity of the MJF Group premises gather most days at the two MJF Kids Centres where they are provided lessons in English, Computer and other subjects in their school curriculum, vocational training and essential life skills and much needed psycho social support. Through their publication, Voice of the MJF Kids, the children learn to appreciate important concepts such as peace, ethnic harmony, the environment and the heritage of Sri Lanka.