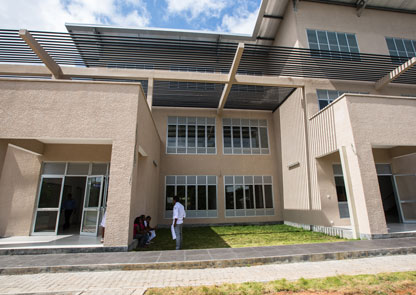 Our flagship centre, the MJF centre located in Katubedde, Moratuwa is currently our largest and most vibrant centre invested in bringing positive change to people’s lives. Established in 2010 on the site of a former clothing factory, the centre is now an urban, verdant oasis - both literally and figuratively.

The centre commenced as a place for low income families from the surrounding area to send their children for educational support. From there grew the need to address the needs of children with disabilities. Therapies, counseling and schooling remained out of reach for many.

The Rainbow Centre was thus conceived and takes in children with Down’s Syndrome, Cerebral Palsy, other Neurological and learning disorders. Today, the programme provides a haven for children not accepted by other similar schools due to the severity of their disability. Students arrive in the morning and return to their families or caregivers by early afternoon.

The Women’s Development Programme began as awareness sessions for the mums of the Moratuwa Centre. Little did we recognize the psychosocial value of giving women an opportunity to not only increase their skills in cookery, sewing and nutrition but the power of peer counseling.

Vocational Training evolved from carpentry lessons and the establishment of the Curtiss Institute of Design for courses in MS Office and Graphic Design and finally to the Empower Culinary and Hospitality School which commenced operations in October 2016.

Our latest addition to the Centre is a pilot catering to the youth. MJF Youth serves as a meeting place for the sharing of ideas, awareness, resources, job banks and small grants for young people aged 16-30. It seeks to promote opportunities, youth wellbeing and a forum especially for youth at risk and those who stop formal education following their O’levels.

In addition to the above the MJF Centre also hosts the Peace Centre. A place for individual or group counseling. These sessions are biblical in origin and by appointment. For further information, please call Pastor Anil + 94 718567784.

The Centre’s Arboretum, Heritage Centre and DC SARC are open to the public on Wednesdays for reservations or for further information please call 011 4822490. 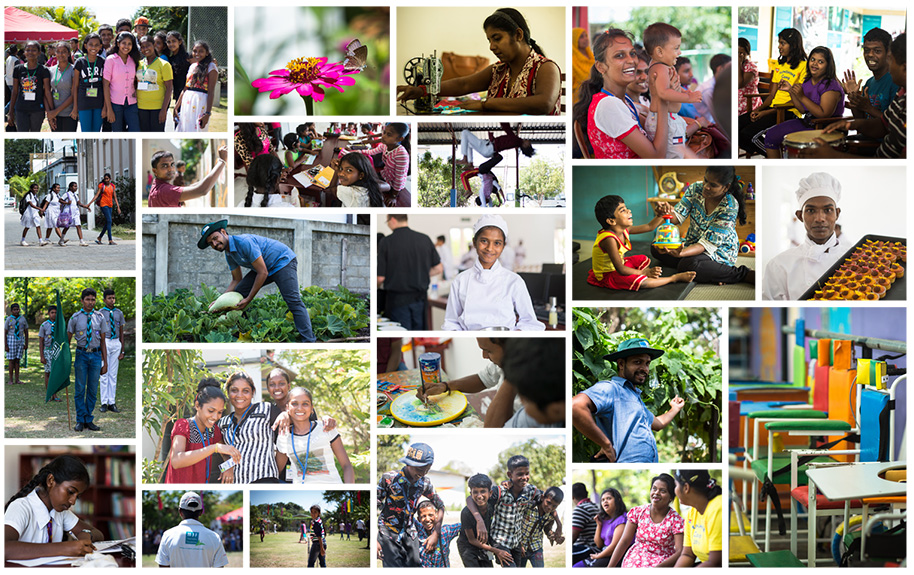 The MJF Centre Moratuwa was established in 2011 to support Dilmah Founder Merrill J. Fernando’s vision of sharing the success of his Dilmah brand with the less fortunate and the poor. The Centre is located on a sprawling urban estate in Moratuwa, a populous city in the Colombo District. The MJF Centre houses the MJF Kids Programme, the Rainbow Centre for children with disabilities, a centre for women to seek support and solace, the Curtiss Centre for Design, Empower Culinary and Hospitality School and the Dilmah Conservation Sustainable Agriculture Research Centre.

The Horse & The Butterfly

Daco is a French urban artist whose geometry-inspired Graffiti has been featured all around the world. He was in Sri Lanka for the month-long French Spring Festival organized by the French Embassy and Alliance Francaise de Kotte.

Take a look at how figures of a horse and a butterfly emerge from a kinetic flurry of spray paints and geometric forms as he brings colour and life to the walls of MJF Charitable Foundation, Moratuwa with his latest Graffaune.

"A boy from a tea plantation … winning the Best Commis in Sri Lanka and going into the Asia Pacific Competition - and probably to the World Finals is a HUGE achievement” - Rohan Fernandopulle (President – Bocuse d' Or Sri Lanka)
Meet the ambitious and talented Dinesh; a graduate from the Dilmah Empower Culinary and Hospitality School.

We invite young culinary enthusiasts from Sri Lanka to join our school. Applications for the next intake are ongoing, for further information please call Manil Perera at 011 4888323.

The MJF Rainbow Centre Moratuwa held its annual concert on 1 December 2013, bringing together all children from the MJF Charitable Foundation for an evening of artistic and creative expression.

This year's stage featured touching performances from both underprivileged and differently-abled children from the Moratuwa Centre, MJF Centre Peliyagoda and the Rainbow Centre in Moratuwa whose talent and flair were applauded and praised by an encouraging audience.
The concert was aimed at looking beyond social, cultural, economic and religious differences while celebrating the individuality of every child.
These children showed us that we are all different, That our differences -- whether Down Syndrome, Cerebral Palsy or any other -- can be celebrated, Through understanding, and focusing on what we can do, and not what we cannot. Celebrating Differences 2013.

The Rainbow Centre of the MJF Charitable Foundation hosted World Down Syndrome Day 2014 celebrations on 22 March 2014 at the MJF Centre, Moratuwa. The event, aimed at commemorating the lives of those with different abilities saw guests and volunteers joining together to raise awareness amongst the public about the abilities of individuals with special needs. Invitees and children with took part in interactive activities including mural painting, a fashion show, talent show and fun collective games. 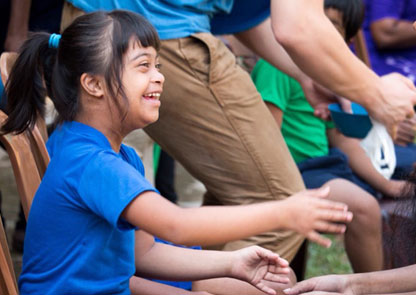 The Rainbow Centre provides holistic development for children with special needs through education and therapy for those with Cerebral Palsy, Down Syndrome, Autism and other developmental disorders. The Centre houses a pediatric physiotherapy unit with state of the art equipment while there are full time physiotherapists and speech and language therapists attached to the centre to work with students having speech and sensory impairments. The early intervention programme for the toddlers, special education, life skills and vocational training for the youth have resulted in a marked development in these special needs children. 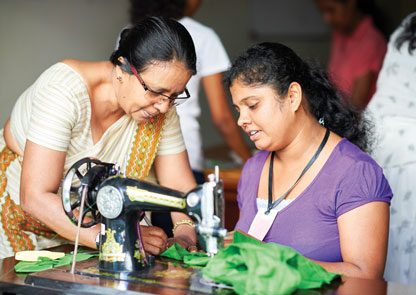 The Women’s Development Programme was introduced in 2013 to meaningfully deploy the young mothers of the programme participants in various activities such as home gardening, cooking, sewing, arts and crafts to support them reach entrepreneur levels in their chosen area of talent 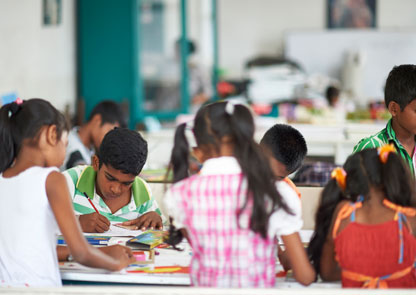 The MJF Kids Programme conducted at the Centre every afternoon brings quality education, skills development and vocational training for children from low income families in and around Moratuwa to help them overcome the challenges confronting them due to extreme poverty, lack of opportunities and guidance. Since its inception, a decade ago, the MJF Kids programme has exposed over 500 underprivileged youngsters to a life of possibility by tapping into their inherent abilities requiring only means of nurturing. 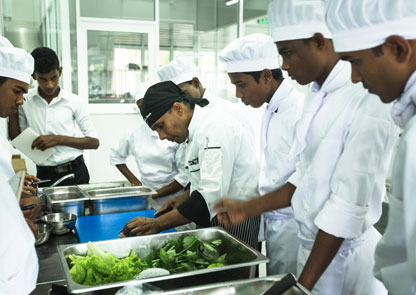 A premier culinary and hospitality training facility, the School has the objective to create new avenues for underprivileged and marginalised youth with empowerment through education in the gastronomy and hospitality industry of Sri Lanka. The school uses an intensive training method with visiting international culinary professionals supplementing the Sri Lankan faculty to provide the students with comprehensive knowledge and global perspectives on cuisine and hospitality. 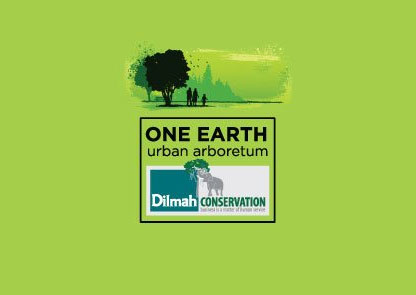 The urban arboretum, the first of its kind in Sri Lanka, consisting of 500 different types of plants and trees was initiated by Dilmah Conservation in an effort to encourage the preservation and expansion of forests in urban areas and thereby promote a more greener and sustainable world. The arboretum exposes urban communities, particularly the younger generation to nature and educate them on the multiple functions of trees and their significant value to society, the environment and its inhabitants. 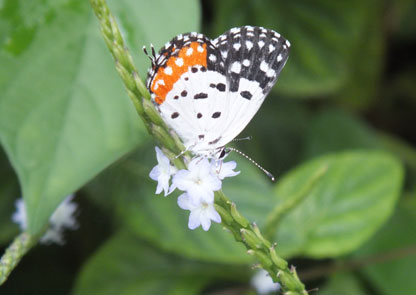 Dilmah Conservation set up a butterfly garden at the Moratuwa Centre to nurture the declining butterfly population in the country. Sri Lanka is home to a diverse butterfly population, slowly declining due to extensive urbanisation and reduction of nectar and host plants. It is estimated that there are around 247 butterfly species residing in Sri Lanka and of this, more than 50 species have been identified at the Butterfly Garden in Moratuwa. 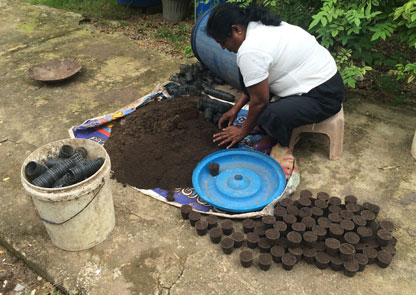 The Dilmah Conservation Sustainable Agriculture Research Centre (DCSARC) at the Moratuwa Centre has the objective to support research on sustainable agriculture and to promote organic home gardening methods such as vertical gardening, bio char production and fertilizer composing. The project aims to encourage the use of cost-effective and sustainable methods to improve the quality of small-scale agriculture. 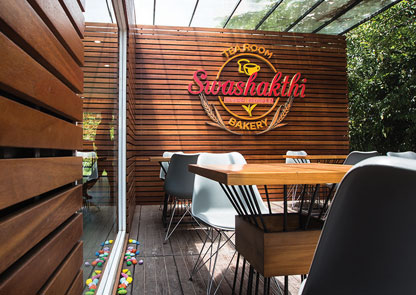 The Swashakthi Bakery and Tea Room is aimed at providing less privileged who come to the Moratuwa Centre with sustainable means of income. Part of the team handling operations at the bakery are students from the MJF Centre’s Rainbow Centre while the bakery products are made by those from the Women’s Development Programme. 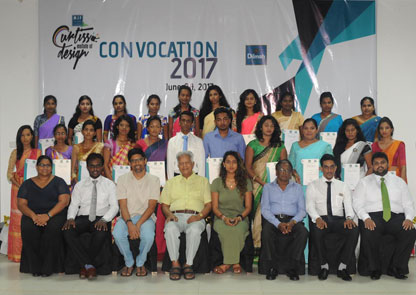 Established with the support from Dilmah Partner Daron Curtiss of New Zealand, the Cutiss Centre for Design assists youth from low income families excel in the area of graphic design. The unit, equipped with 48 computers, has the capacity to provide training in Graphic Design and MS Office for around 329 students, per year 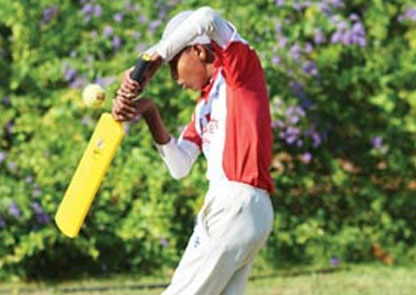 A joint initiative between MJF Charitable Foundation and Cricket Live Foundation New Zealand, the programme provides cricket coaching for underprivileged children to enable them progress through cricket. It also helps them learn and develop life skills like punctuality, time management, respect for family and friends, self-discipline and team work, necessary requirements for a successful future. 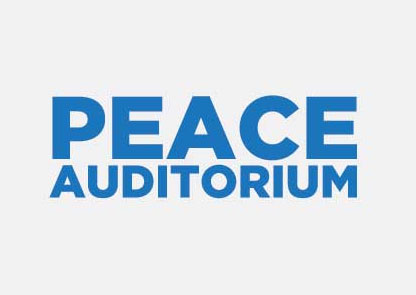 The Peace Auditorium is a space dedicated to the facilitation of working with the most vulnerable members of our society.
This multi-purpose hall has hosted trainings, medical camps, counseling, elder care training, awareness sessions and dancing workshops and acts as a retreat for some of the area’s most vulnerable neighbourhoods and people. It is available on a case by case basis for likeminded individuals and organizations who share the Centre’s ethos and seek ways to change lives and give back to communities.

Fees are charged on a sliding scale and are based on the purpose and size of the event.

For further information and to apply for its use, please email info@mjffoundation.org or contact Aranthi on 011 4888332. 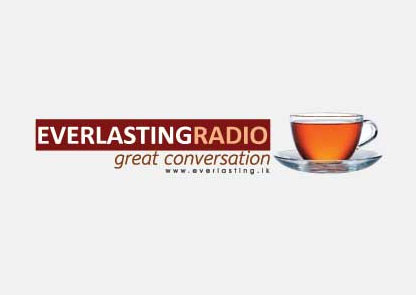 Entertainment and inspiration from Everlasting Radio, with intelligent conversation on health, nutrition, enterpreneurship, technology and every facet of life. Tea Inpiration from Tea Radio by Dilmah. 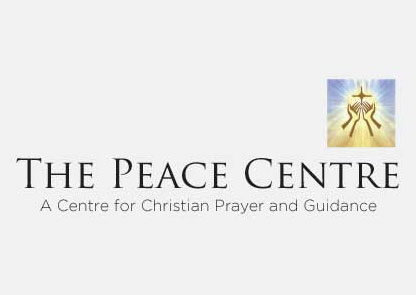 The Peace Centre is a centre for prayer, guidance and Christian counseling.