There’s never a dull moment at this centre

A day packed to the brim with lessons, activity, recreation, therapy and vocational training.

Just before a bell announces the start of the timetable, we too are at the National Centre for Children with Cerebral Palsy and Other Developmental Disorders (NCCCPDD) in Kalapaluwawe, Rajagiriya to see the day taking shape, making major changes in the lives of a group of children who had nowhere to go to or no one to turn to earlier. Their parents had to accept their lot with stoic resignation. But that is the past now.

The NCCCPDD – a joint venture of the Cerebral Palsy Lanka Foundation and Dilmah’s Merrill J. Fernando Charitable Trust – saw the light of day in September 2016 after numerous ‘wheelchair camps’ to assess the needs and prevalence of cerebral palsy (CP) in all 25 districts of Sri Lanka.

The camps were an eye-opener, with a high prevalence of CP being found in Kandy, Jaffna and Kurunegala cities and the realization that while there is value in the roll-out of national policies and standards for disability, local transport and the lack of disability access across the country require localised services for regular therapy, resources for families and caregivers and training for children, caregivers and medical professionals.

The NCCCPDD, dedicated to the promotion, research, rehabilitation and support of children and families with CP, Down Syndrome, Autism and other developmental disabilities, which opened its doors to 32 children, has seen the numbers swell to nearly 130 and the children and youth (ranging in age from 0 to 23 years) who are following vocational training have made immense strides. Building on this successful model, a centre has now been set up in Kandy, while two more are on the cards this year for Jaffna and Kurunegala.

We are shown around by NCCCPDD’s Manager Dilani Gopi and the Head of Rehabilitation Services Gopi Kitnasamy whose determination to give of their best to their son, Danush, living with CP led to their paths converging with the Merrill J. Fernando Charitable Trust. The rest, of course, is recent history and Danush is now in the vocational training unit learning to be independent.

Those enrolled at the NCCCPDD all in green uniforms, have been grouped, depending on their ability and academic performance, into Levels going up to 4, with the latter with normal IQ for their age following the national syllabus.

Whether going round and round on the roundabout which has been modified for wheelchairs to be fitted to it; see-sawing up and down, being on the swing flying not too high, jumping on the trampoline or wheeling around in the garden where plants stimulate all the senses and huge ‘musical instruments’ of pipes etc aid the therapy, the NCCCPDD is all about inclusivity.

Children engage in yoga along with their mothers, for better breathing, digestion and also to help limb movement; go along a sensory pathway comprising grass, chips of pol-mudu, stones and sand; take a dip in the pool for a little hydrotherapy; or learn their lessons seated in custom-made chairs to which their bodies fit perfectly. 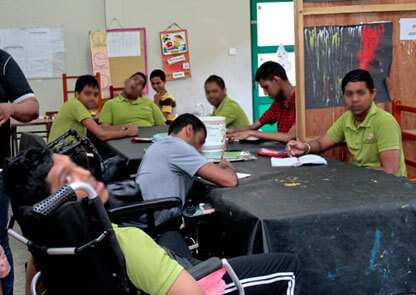 We see the 31 staff members including special education teachers, their assistants, physiotherapists, speech therapists, occupational therapist and psychologist all engaged in this labour of love.

The NCCCPDD and Kandy centre follow a hybrid model – they are registered health centres offering the latest international therapies and equipment with trained professionals to enable children with CP and other developmental disorders to maximise their potential. The local alternative also reduces the strain on the children and their caregivers in terms of access which then increases the frequency of attendance.

These one-stop centres offer physiotherapy, speech and language therapy, gait analysis, occupational therapy, life-skills and psychological assessments, with parents trained in follow-up techniques to be carried out with the children at home. There are also parent-teacher meetings and even teachers visiting the homes of the children.

The NCCCPDD has also trained more than 1,500 professionals, midwives and caregivers through workshops led by renowned international and national practitioners. In October last year, the centre launched a national campaign focusing on the importance of early intervention to mitigate the effects of CP.

Amazement, meanwhile, is the reaction when we see the activities the parents have been engaged in – furniture in all their variety from cardboard and paper (appropriate paper-based technology), jewellery-making, tailoring and knitting, all products which have drawn many buyers at major exhibitions.

Most poignantly, many of the custom-made chairs that the children at the NCCCPDD use are a gift from the heart of these parents.

Rukshan reaches out with his tenth concert

The ‘Rukshan Perera Live in Concert 10’ will be held in aid of the affiliate Cerebral Palsy Centres of the NCCCPDD to be opened in Jaffna and Kurunegala this year.

The concert to mark the 10th anniversary of popular singer Rukshan’s return to Sri Lanka from America will be held at the Bishop’s College Auditorium on February 16 (Sunday) at 7 p.m. 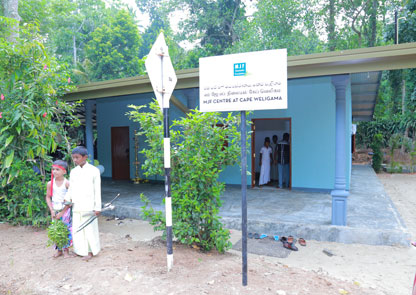 The first centre fully supported by Resplendent Ceylon, the Cape Weligama Centre supports the community living around the hotel. Weligama’s main source of income is through fishing. With the increased costs competition for the ocean’s resources, the community is working hard to diversify its economy and opportunities. Tourism is the most obvious industry. The MJF Centre at Cape Weligama is the only centre of its kind supported by a company.

The Centre officially opened in September 2017, but the hotel staff and management team has been working with the community since April. It currently consists of an MJF Kids programme providing educational support, scholarships, music, art, dancing, chess and pottery for children aged 13 and below. From 2018 onwards in plans to introduce programmes for Women and youth in terms of livelihoods and lifeskills support. 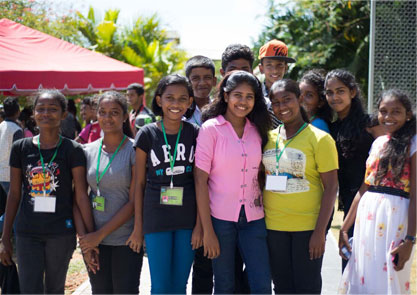 One of our oldest centres; the MJF Centre in Siyambalanduwa began as a tuition class in a local church in 2008! Years later we support English, Sinhalese Science, Mathematics and Tamil to over 500 students attending their Ordinary level exams across a 10km radius.

The Province of Monaragala and the Siyambalanduwa Division has a high rate of child labour and low school attendance in Sri Lanka. That coupled with one of the lowest levels of income in Sri Lanka means that children are at risk of not being able to complete their education up to O’levels and have fewer alternative education opportunities.

There is little else in terms of livelihoods and income generation in this farming community. This has led to the youth of the area entering the service sector. Climate change and low profits generated from farm produce has led frustrated Youth to abandon their parent’s plots preferring to migrate to urban areas or take up livelihoods in search of work and an easy income. Another key issue in the area is early marriage especially in the case of girls. To counter these, the MJF Foundation through their coordinator Chaminda, has established not only the educational support to ensure a greater number of children pass their O’levels but also look beyond for much needed Computer and IT skills training. The Foundation also supports scholarships for Advanced levels and University as well as vocational training geared towards the apparel industry and the setting up of micro enterprises. The impact has been immense with a marked improvement in the rates of O’levels pass out rates AND school attendance .

To support children in schools and encourage them to complete their secondary education, our Cricket Live Foundation, a collaboration with Alex Reese and his academy in New Zealand, reintroduced cricket to encourage young boys and girls and to provide them with sporting and lifeskills. 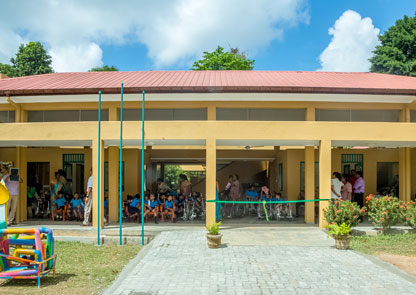 The Centre’s role is manifold. It acts as a facility that works with children and young people on a daily basis providing them with resources and personnel trained in caring for people with disabilities. It also remains as a centre of excellence in research and training on therapies and interventions that support children and adults affected by CP, their families as well as health workers and midwives. Early detection and intervention for those affected by CP is essential to their rehabilitation and ability to integrate into mainstream society. Finally, it acts as a support and resource centre for families from prenatal to adulthood so that they may be given the emotional support, preparedness, technical resources and trained expertise to manage a CP affected individual.

The support offered by the NCCCPDD includes:

A national database to collect data on those affected by Cerebral Palsy and connect them to available local and international resources is planned for early 2018. 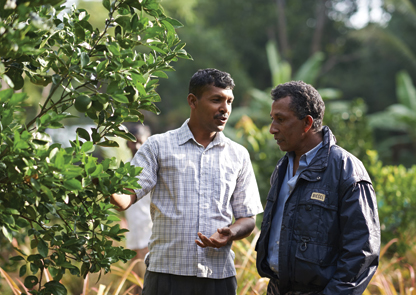 Pahallanda near Ampara is a testimony to how it only takes one person to transform a community. Following the success of our local hero Samantha, the Foundation invested in the Gemi Aruna Society in 2009 investing in the lives of 55 villagers providing them with water and irrigation and later pani dodang (Bibile Sweet Orange) trees as a supplement to their household income. Little did we know that the true fruits of our labour would be the investment in the lives of the men, women, boys and girls of this once sleepy village. The presence of water led to the establishment of shops and micro industry. Farmers who had abandoned their fields are once again using their water to irrigate their fields. A new Gemi Aruna centre not only houses an educational support and scholarship programme but also creates a one stop shop for the 3 lowest levels of local government. Villagers speak not only about the higher numbers of their children finishing their secondary education but also of the efficiency of centralizing the location of government officials and the time saved moving from one location to the other.

Similarly, the small entrepreneurship programme has provided farmers and their families with enhanced resources for their farming activities or other tools and skills to increase their levels of household income. Pahallanda is now seen as a model village for those around it.