Merrill J. Fernando dedicated his life to tea when in the 1950s, he saw the concentration of ownership in the tea industry in the hands of a few large corporations. This was leading to the commoditisation of tea. He decided that in the interest of tea drinkers around the world, and the crop that his country produced with so much care and artistry, he would fight this process of commoditisation.

Dilmah Tea Founder Merrill J. Fernando has been capped as a Doctor of Science by Massey University in New Zealand.

The 100th student graduates from the Empower Culinary & Hospitality School

Why Saama? A collaboration between Power of Play and MJFCF to empower girls wins 8 awards at the State Children’s Drama Festival

Dilmah published the first Integrated Report in 2019. This IR was amongst the top 3 reports in the Food and Beverages category in Sri Lanka.

Ti21 - is designed by Ceylon Tea growing family Dilmah, to express the natural sophistication and taste in fine tea through gastronomy and mixology.

Facilitated the first Climathon in Sri Lanka, held in Jaffna 2019 an area susceptible to the effects of Climate Change.

Dilmah is voted by New Zealand as their most trusted tea brand for the 5th year in a row.

Facilitated by Dilmah Conservation, Kayankerni was declared as the 18th marine and marine associated sanctuary in Sri Lanka, on April 2019

Dilmah was presented the “Most Globally Outreached Brand in Sri Lanka” at the Presidential Export Award, presented by H.E. Maithripala Sirisena, the MoDSIT and the EDB.

Dilmah selected as one of Sri Lanka’s Most Admired Companies by the International Chamber of Commerce in Sri Lanka.

Dilmah Founder Merrill J. Fernando honoured by the International Chamber of Commerce as one of the 3 Most Admired Leaders in Sri Lanka.

Dilmah launches Afternoon Tea for the 21st Century - an evolution of our 8 year journey with the Real High Tea Challenge.

Dilmah t Lounge debuts in Iran with 2 Lounges in Teheran

Merrill J. Fernando honoured with FIRST Award for Responsible Capitalism for improving the lives of underprivileged children and deprived communities

MJFCF’s Empower Culinary and Hospitality School launched, creating new avenues for disadvantaged youth with empowerment through education in the gastronomy and hospitality industry of Sri Lanka.

In research project supported by Dilmah Conservation 8 lichen species new to science were discovered. Including a new species discovered within Dilmah’s Queensberry estate and so named ‘Heterodermia queensberryi’.

“what is very interesting when you see how Dilmah has pushed the boundaries of tea they are pushing the boundaries in similar ways to how wine has been approached with different origins, different heights, different flavours - it becomes very interesting to see how that can marry not only in cooking but also used as a pairing to food like you do in wine, so it is a great experience actually, it’s a huge eye opener!” Ragnar Fridriksson Managing Director of WACS

Veddah Handicraft and Pottery Centre was declared open by DC

“Merrill J. Fernando has been a privilege to watch by many measures of a true champion, whether it is about tea, people, passion, pride, mate-ship, family, principles, guts and determination or a never-say-die self belief. Merrill is admired for many of these attributes.” Eric Ellis/ Media – The Sydney Morning Herald

‘Fine tea has the ability to dignify food in a way that no other beverage can. Functionally, tea is an elegant accompaniment to food for its ability to cleanse the palate of fats, sweetness and prepare the taste buds to appreciate the next dish. Good food, good tea, delicious individually but together having the potential to produce a magical sensation on the palate.” Dilhan C. Fernando Son of Dilmah Founder Merrill J Fernando

Teamaker and the Mixologists Programme

“I know now that when I go back to Australia, everything that I see, smell and touch that is to do with a product of tea, it is a completely new world.” Simon Toohey, Celebrity Mixologist, Australia

Dilmah Conservations together with the IUCN and Chamber of Commerce set up the first private sector environmental body, the Sri Lanka Business and Biodiversity Platform.

“With Merrill, you are never told, you are invited to share his passion and knowledge for not only tea, but his beautiful country and his world of giving to those less fortunate. And with his kind and humbling manner and generous heart, you are instantly swept up with admiration for his work and achievement and of course Sri Lankan Tea.” Allyson Gofton/Food Writer and TV Presenter New Zealand.

Dilmah embarks on a partnership with Shangri-La hotels worldwide

Ahikuntika (Gypsy) community’s 2011 Varigasabha or clan meeting, the first of its kind in 6 decades, organized by the Dilmah Conservation

DC launches large scale investigation on current Dugong populations in Eastern Sri Lanka, acquiring valuable information that can serve as a base for Dugong research in the future.

“Many of the world’s trendy latte-sippers may have long looked down on tea as the favourite tipple of an eccentric great-aunt, but Dilmah is positioning tea as a gourmet product, clawing back some of the $85 billion world hot beverage market conceded to coffee’s 75 per cent share by making tea fashionable” Eric Ellis/ Media – The Sydney Morning Herald

Inauguration of Tea in the Five Senses

“IUCN appreciates the foresight and leadership of Mr. Merrill J. Fernando and the MJF Charitable Foundation for the pioneering work in recognising the need and opportunities for mainstreaming and integrating environmental aspects in business...” Julia Marton-Lefèvre, Director General, IUCN, International Union for Conservation of Nature

“Among all the platitudes that deservedly come Merrill’s way, I would find it hard to surpass one very special aspect of his makeup. That is the work he does for the community. The sums of money he expends on this are colossal money spent to uplift people who he has never ever seen or met in his life! I honestly believe that he is doing, to quote John F. Kennedy, “God’s work on earth”. God does not come down himself to do his work, but gives people that task and Merrill is one of God’s direct messengers I think. If there were four or five other business people like him in Sri Lanka, a lot of the problems would be solved and this country would be totally different. That is the magnitude of the work carried out by Merrill’s Charitable Foundation. ” Selvam Mather/Friend and Business Associate

“This is an industry that has been incredibly slow to innovate, and relatively tiny Dilmah has showed it how.” William Gorman, Executive chairman of Britain’s Tea Council

“I was struck by Merrill’s unwavering passion – not just in terms of sales made and dollars earned, but in the importance he placed on quality, tradition and his willingness to share and discuss his Dilmah and tea in every detail.” Daron Curtiss / Advertising Partner New Zealand

“Merrill has been a great leader and an example for all future generations of business people here as well as abroad. A truly remarkable Sri Lankan, whom I have been proud to call my friend and I am overjoyed to congratulate on a successful completion of twenty one years of Dilmah.” Selvam Mather/Friend and Business Associate

Launch of the Dilmah Exceptional Range of Teas

MJF Charitable Foundation launches the MJF Kids Programme, to nature the hidden talents of the kids from the under privilege families around the Dilmah Factory

Dilmah Launches the Tea Gastronomy Revolution with “The Culinaire”

International think tank announces 2005 Top Brands With A Conscience. The Medinge Group, an international think-tank on branding and business, today releases its second annual ‘Top Brands With a Conscience’ list. In the Group’s opinion, these brands show that it is possible for brands to contribute to the betterment of the society. The international collective of brand practitioners meets annually in August at a secluded location outside Stockholm, Sweden, and collaborate on the list, judging nominees on principles of humanity and ethics, rather than financial worth. The Brands With A Conscience List is evaluated on criteria including evidence of the human implications of the brand and considering the question of whether the brand takes risks in line with its beliefs. Evaluations are made based on reputation, selfrepresentation, history, direct experience, contacts with individuals within the organizations, media and analysts and an assessment of the expressed values of sustainability.

“In the initial years, during the launch of the Dilmah brand in the Australian market, it faced daunting competition from established international brands. Only a man like Merrill, singularly committed to the cause of pure Ceylon tea, could have the staying power to make a success of this project.” Victor Santhiapillai/Former Chairman of the Sri Lanka Export Development Board (SLEDB)

“The legacy of Dilmah is not only for Malik and Dilhan but for the whole country.” Malinga H. Gunaratne/Tea Planter

Dilmah Founder launches the “Do Try it!” campaign

“Merrill became the ultimate advertising asset- a believable presenter- because he lived his product. I was confident we had a living legend in the making.” Daron Curtiss/Advertising Partner New Zealand

“His passion and pride in his Dilmah brand has made him stand out from his competitors not only in the tea category, but also against any brand on the Australian Supermarket shelves.” Murray Johnston/Woolworths, Australia

Railway from Colombo to Kandy opens

James Taylor lays out the first tea plantation in Ceylon 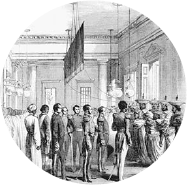